Do you represent a cultural centre or network?

Your network should be connected to its European family. 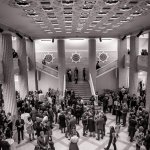 VEF Culture Palace is among the most interesting venues in uptown Riga and offers many diverse cultural events.

The building was constructed in 1960 and fully renovated in 2017. The Palace has two theatres:

The building was named after the State Electronical Factory (VEF - Valsts Elektrotehniska fabrika), which was one of the biggest companies in the country until the late 20th century. Honoring the meaningful past, the Culture Palace has restored the Museum of History of the VEF Factory, including innovating installations alongside some restored original productions of VEF factory, which offer the opportunity to listen to the radio exactly as it sounded in the 30s, the 60s and the 70s, and to take a photo with the 20th century's smallest camera, the Minox.